Of Pots and Kettles 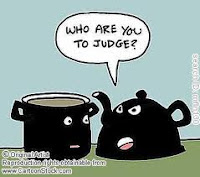 I suppose it was to be expected.

In "setting the stage" for my reports on Fiji, I disclosed, quite properly and in accord with most codes of ethics (not to mention standard research behaviour) that part of my recent visit to Fiji had been paid for by the Ministry of Information. In the eyes of some this immediately tarnished anything I may write on my impressions and interviews.

A more balanced reaction would have been to reserve judgement and then. if they thought me compromised, to attack what I wrote, instead of questioning my integrity and attacking what I might write even before I had written a single word.

I understand the concern but would have hoped that my postings on this blog would have demonstrated (as I have said several times) that while I support Government's stated vision for a fairer Fiji, and try to make my comments helpful, I do not support some of their actions. Nor do I support a return to the corrupt, unfair, and racially biased Fiji prior to December 2006.

I must confess, though, that I have some doubts about their stated concerns. What, for example, were Victor Lal and "Fiji Wind" inferring when they asked me how much the visit cost Government? Why didn't they ask me how much this visit and, and my previous visit, cost me? I wonder why they don't ask this question of the anti-Bainimarama journalists? Or ask Ratu Tevita Mara, who regularly makes public statements, who has been paying his expenses since he left Fiji?

That "Navosavakadua" in FijiToday judged me before I have said a word is no surprise. For him, the Bainimarama government can do no right and the Qarase government did no wrong. Under the heading "Everyone has their price but ..." he called me "one of their longest serving apologists... Stroke his ego by treating him as if his opinion matters and you have him. Much cheaper than the Qorvis."

But it did surprise me that he knew I had three drivers who he said were "all skilled in the art of ego stroking". There must be a spy within or close to the MOI, probably the same person who writes the satirical Grubby Shazzer pieces. But if he'd asked the drivers, they would have told him I did not ask them a single political question, nor did they reveal their opinions to me.

The most disappointing criticism came from USP journalism lecturer, Canadian Dr Marc Edge, in his personal blog Fiji Media Wars. He has previously publicly attacked two former USP Heads of Journalism, Prof David Robie and Shailendra Singh, and now he publicly attacks me. I am an Adjunct Professor of the university so he is  publicly questioning the integrity of a colleague: not what I have written but what I might write. This is not normally accepted behaviour in academia.

Further, he is on a work permit issued by the Fiji government he constantly criticises, and a significant portion of his salary is paid for by the Fiji Government. He is not a citizen and is a relative newcomer to Fiji. If I were similarly placed, I would listen and say little.

It says much for the tolerance of the government and the university that he is still able to publish partisan polemic exercises on his blog. Others have their association with the university terminated, and  their work permits cancelled,  for less.

A reader sent this email: "How can he pour this kind of derision on a respected former academic from USP? It is utterly gratuitous and uncalled for. Perhaps you need to complain to USP when you are so egregiously misrepresented by the Head of the School of Journalism."

And so, distracted but having cleared the air, I defer my General Impressions posting until tomorrow.

Marc Edge is a trashy Canadian nobody who bores the pants off everyone who meets him. I know because I've met him. Arrogant, supercilious and crass. Come to think of it, a dickhead. The sooner he gets back on that yacht he keeps boasting about, the better. Sail off into the sunset, Marc. You've more than outstayed you welcome.

Was recently present at a talk given by Dr Edge. Holy mother of God, what trash! Giss a break you long winded southern hermit

'Further, he is on a work permit issued by the Fiji government he constantly criticises, and a significant portion of his salary is paid for by the Fiji Government. He is not a citizen and is a relative newcomer to Fiji. If I were similarly placed, I would listen and say little.' oh Croz you did learn something on your trip to Fiji about towing the government line or else. What a very interesting threat.

So there we have it , if you are paid by the regime and granted a visa, be oh so grateful and watch yuorself...it could have come from Bainimarama himself. Croz is certainly picking up tips from the junta.

Fairminded Fijians have more respect for Mark than Croz. Mark speaks the truth about the illegal regime in Fiji the likes of Croz only gloss over. Mark is fearless unlike the timid and easily bought Croz who easily jumps at any freebie, even from a hated regime that continues to persecute those of us who live here in Fiji. Invite you all to read mark's piece on Croz here: http://tinyurl.com/b3rgm2s

Croz is a Fiji patriot with the country at heart. Anyone who says otherwise is plain wrong. Croz is a very astute and learned observer of the Fiji situation, and his recommendations are well thought out and sensible. In essence Croz talks about making the best of a bad situation, learning lessons from history and building a better society. The coup took place five years ago. But some people find it hard to accept reality, and shoot the messenger. Marc Edge is a newbie. As a maturing academic on Fiji, he has a long way to go. Croz's academic record leaves Marc Edge for dead. How many papers has Marc Edge written on Fiji? Forget about writing. How much has he read abut Fiji? Judging from his simplistic, clichéd comments, not much. There is nothing worse than an ill-educated academic shooting off his mouth.

It comes as no surprise that shots have already been fired even before Croz has time to put up his pieces on his recent visit to Fiji. After all the mindset amongst Marc Edge and Co seems to be anything associated with the current Goverment needs to be shot down, ridiculed or dismissed as propoganda.
Surely any right thinking journalist would wait until a news peice is out before judging it. How ironic that the very people who should be providing a balanced informative view for the rest of us nevermind educating the next generation of journalists seem to enjoy spending their time on pre-emptive attacks.
Let us wait on what Croz has to say before jumping to conclusions. The very fact that he has openly stated that his trip was funded by the Fiji Govt goes a long way to show that he has nothing to hide. I for one am looking forward to reading what he has to say on the situation in Fiji.

True Edge and his favourite newspaper the Fiji Times are two of a kind.
The USP Journalism School is run by an expatriate with an inflated ego who thinks he is an instant expert on everything in Fiji. Grubsheet exposed Edge for what he really is including appearing in Fiji Times advertising.
The Fiji Times is run by a businessman who used to think he was the expert on deals. But under the anti corruption PM Voreqe Bainimarama Mr Motibhai can't get away with what he used to do with his old political cronies. Instead the owner of the Fiji Times owner has been jailed for corruption.
Edge will never have the status or respect Professor Walsh has earned over many years of service to USP and Fiji. The Fiji Times newspaper will never again dictate to Fiji and think it is bigger than anyone else.
Yes I think the Fiji Times and Edge are two of a kind. No wonder Edge picks on Prof Walsh but ignores what the Fiji Times is doing with the Americans.

Yes let's hold Croz and the Fiji Sun as trusted conveyers of the regimes message, and BTW, the owner of the Fiji Times was handpicked by the regime wasn't he?, he was their 'preferred choice'.

You should know that this is standard in just about every country in the world. Visitors and non-nationals are forbidden from participating in political activities.

Try engaging in political activism in some other country in the world and you'll quickly find that the same rules apply everywhere. Vulagi are not normally allowed to participate in such activities.

Oh but the regime has heaps to hide and they know it, so does Croz. But i doubt he would want to actually know the answers as it doesn't fit with his rather romantic view of the 'benevolent dictatorship', a rather disgusting concept, if ever i heard one and always used by people who don't live with it.

Dear Professor Walsh,
I am very much interested to read more about your recent trip to Fiji, having done my own research over the past 2 years.Where can I find your report or is it still in the making?