A REMINDER ON DAYLIGHT SAVING. Clocks will be put forward one hour on Sunday. 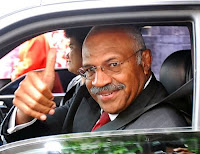 THE FATHER OF FIJI'S COUPS, Sitiveni Rabuka, focussed on forgiveness in his submission to the Constitution Commission. He wanted the recall of the GCC to discuss forgiveness as a pillar character of Customary Law of the land and centuries old nature of “vakaturaga” of the iTaukei culture, and thought the GCC should be able to forgive Bainimarama and others involved in the 2006, and that a similar opportunity should be provided for the Methodist Church (although both church and state had crossed the line an interfered with each other's functions).

These events should be  followed by a truth and reconciliation commission. Rabuka also stressed the importance of good iTaukei leadership for national coherent growth and iTaukei participation in national development, adding that if traditional leaders prove inadequate, they must be replaced by those who have the confidence of the community and can lead by example.

THE SDL SUBMISSION. The Soqosogo Duavata Ni Lewenivanua Party whose government was overthrown in the 2006 Coup  wants:
SDL affirms the 1997 Constitution as the base on which the Constitution Commission should draft the new constitution and proposes:
SDL executive member Pio Tabaiwalu and Ratu Jone Kubuabola presented the submission and former parliamentarians, including Matiasi Ragigia and Dr Tupeni Baba were also present.

FIJI SUGAR CANE GROWERS ASSOCIATION SUBMISSION.The submission blamed the 2006 Coup and the Government for the state of the sugar industry.

Causes of sugar decline
The FSCGC attributed the situation to the non-renewal of leases, the rising costs of production,  the loss of the $350 million grant from the EU, and Government's scrapping of the Sugar Cane Growers Council in which the FSCGA played a major role. The Association claims that but for the Coup Fiji could have been producing 4,000,000 tonnes of cane and 400,000 tonnes of sugar a year.

Electoral recommendations
The FSCGA submission, signed by general secretary Bala Dass, sought the retention of the 1997 Constitution with these changes: a common roll, proportional representation based on a national constituency; a closed list system with 35 seats to be constituency seats based on boundaries that result in equal value to each vote; a parliament of 71 members with power sharing and a Multi-Party Government.

Sugar recommendations
On the sugar industry, they wanted the entrenchment of the Agricultural Landlord & Tenant Act (ALTA); the leasing and re-leasing of indigenous land by Government via the Native Land Trust Act with the NLTA taking 10% of rentals; rentals maintained at 6% of unimproved capital value with Government paying the other 4%; a guaranteed minimum price of $80 a tonne; the removal of the 3% sugar export tax; and the re-establishment of the FSCGA. They wanted the Fiji Sugar Corporation to be responsible for cane harvesting, cartage and associated costs.

Other concerns and requests
They also expressed concern about rural roads and infrastructure; and wanted subsidized fertilizers and weed killers; concessions on fuel and spare motor parts; less "insensitivity" from the Land Transport Authority for vehicle defects caused by poor road conditions;  regular agricultural grants to needy farmers; an old age pension for farmers, free tuition from primary to tertiary education levels; better schooling and hospital treatment; the end of daylight saving, and — no immunity for the perpetrators of the coup.

LABASA SUGAR MILL MAKES HISTORY. The Labasa sugar mill yesterday created history. It produced close to 44,000 tonnes of sugar valued around $44 million in almost four months of crushing, ending the season two months short of the usual December deadline.The siren from the mill went on for 30 minutes as workers, farmers and the public tapped each other on the back to salute the superb performance of the sugar industry stakeholders on Vanua Levu.

MERE SAMISONI BACK IS BACK IN COURT after returning from overseas.
Samisoni, Apete Vereti, Semisi Lasike and Mataiasi Ragigia have again appeared in court charged with urging political violence.The case is now moved to the 6th of February next year for mention.

ALLEGED THEFT BY SOLDIERS. Chief of Staff Brigadier Mohammed Aziz  has announced that five military personnel were arrested and detained the five in relation to embezzlement in the pay office last month. The five are now under open arrest. A substantial amount of money is involved. The matter has also been referred to the police.

ELECTORAL DOUBLE DIPPING. The Elections Office  has identified over 1,000 duplicate files in the electronic voter registration database. The files concern people who have registered more than once. In one instance a name was registered 10 times. A provisional roll will soon be available for people to check whether their names are on the roll.Some 488,000 people registered in the first phase of registration.  The report did not say whether the 'double dippers' would be prosecuted.

LEVUKA A WORLD HERITAGE SITE? Fiji's first capital  is applying for world heritage status. National Heritage director, Peni Cavulagi, says he hopes to submit Levuka's case to the World Heritage Committee in July next year. Levuka is unique in the Pacific because of its  history and several buildings are over one hundred years old.